CORINNA GETS ON A PLANE 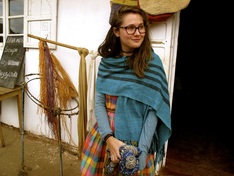 ​“Whilst studying French at university the question of what to do with my year abroad to practise the language arose.  Whilst the university was keen that I went to France to speak some ‘proper French’, this wasn’t what interested me.  I had heard about Feedback Madagascar through a friend and I got in touch with Jamie (Spencer) to see if I could be any assistance in this ex-French colony, where I was assured that I would have the opportunity to practise my language (and maybe even learn a bit of Malagasy in the process!).  I was delighted when Jamie told me there might be something up my street and suggested I take over Feedback’s communications.  I leapt at the idea and in September 2015 found myself on a plane and bound for Madagascar.

"After spending a little time in the capital of Antananarivo, I headed down to Fianarantsoa where I would be based.  Throughout my four and a half months in country, in order to be able to gather stories and understand a little of all the things this organisation was doing, I headed out to a number of project sites.

"Never have I been so convinced that an organisation was so worthwhile and so needed.  Whilst I heard stories of other organisations who didn’t spend the time to understand the culture in which they were working or who created false expectations and a dependency on aid, FBM/NT stood out.  I discovered just how some of the women in Soatanana had been able to provide for their families and had even saved up enough money to build their own houses to avoid the cramped conditions they were in previously.  I heard the cheers of the children in Maromeno when we visited to tell them that we had received the funding to help rebuild their school.  I saw the difference that introducing yams into the village of Ampasipotsy had made, giving them another food source, outside the monotony of rice and cassava or cassava leaves.

Whilst out there the friends I made often asked what my NGO did, to which the reply was simple: Everything.  The response often came, “Ok, but what do they focus on?  Environment?  Children?  Health?” and I had to explain that the beauty of FBM/NT is that they don’t focus on one aspect, as so often this is where charities fall down – you can’t have a community that will protect the forest when they don’t have food in their bellies, or when they are too weak from the illnesses that befall them. The short amount of time I was there was not enough, and one day I hope that I can return and work with FBM/NT again, but in the meantime I know that if there is any more they can do, they will do it: It’s this that makes Feedback Madagascar and Ny Tanintsika such vital organisations.”